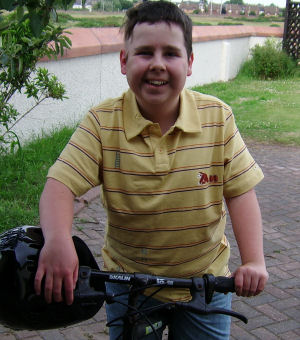 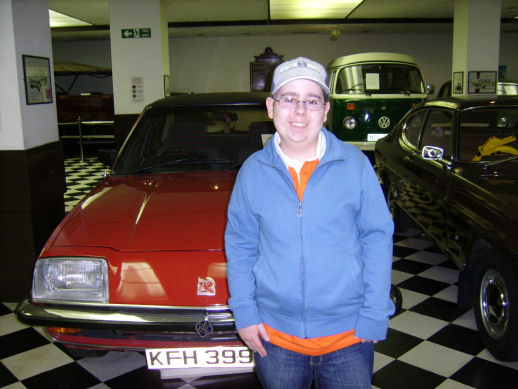 Alex has a right temporal lobe GBM. We live in the United Kingdom.

August 27th 2002: Alex was 10 years old, he woke up that morning with a headache, never had one before,felt sick after lunch. At 5pm he had a seizure. He was admitted to Derby Childrens Hospital by ambulance, had a Ct scan and transferred to Queens Medical Centre Nottingham.

He had emergency surgery,he wasn't expected to survive so the surgeon didn't replace a large piece of his skull[which is still missing] Alex nearly died during the operation.

He was kept asleep for 8 days because his brain stem was bruised. Within 2 weeks he was discharged,even going back to school. He has lost his perpheral vision in both eyes[it's a little like having tunnel vision but he has managed to adapt to it [plays pool,darts,table tennis etc]

The tumour had been removed except fot a very small piece.

Seven weeks after surgery he started radiotherapy, 30 sessions. Alex managed to go to school every day [with me staying in the school office] before going to radiotherapy at 4pm. He felt a liitle tired towards the end, never felt sick, he lost his hair on one side of his head [that has never returned]. The hospital have since addmitted the wait fot treatment was too long. He had a few doses of Vincristine at the end of radiotherapy.

At the end of December 02, Alex had a grand-mal seizure, he was stablised and sent home from Derby Childrens hospital. He started being sick and lost weight, went down to 3 stone 7 pounds. In Jan 03 he had another seizure and admitted to Derby Royal Infirmary where he had a ct scan and eventually admitted to QMC nottingham later that day. [to a different ward,alot better ward]. We were told nothing could be done for Alex and to take him home, he would have 2 days to 3 weeks left. I refused and shouted at the doctors that I would not give up. Alex's tumour was all over his right hand side of his head and it was like 'cottage cheese'. Another operation was too risky. Within an hour of my shouting Alex had Temozolomide, 200mg per day for 5 days. The consultant has thanked me for giving them all something to think about. Alex then had steroids and after 3 weeks he had a hickman line inserted through which he had Cisplatin with Temozolomide each month for a year, sometimes it extended to 6 weeks because of blood counts. He also had a lot of platelet and blood transfusions.

Jan 04 had to stop Cisplatin due to very slight hearing loss.

Oct 05 MRI states cavity is filled with fluid not tumour. Alex had a slight bleed in centre of his head.

March 06 Alex had 6 cysts taken out from his head, back and neck[hard lumps]

May06 MRI states Tumour has gone,the scan was clear.

No-one knows what will happen now, we decided[the medical profession and Alex, Paul and myself] to stop TMZ for a while to see what happens. Alex can't be on chemo forever,he has stayed on Thalidomide. He will have regular scans.

We have just received the results of Alex's recent MRI scan[brain and spine].The scan showed no change from the previous one and there continues to be no evidence of tumour.
This is excellent news.
We just all hope it carries on.
Alex is still on Thalidomide.

Alex had a MRI scan in December,it showed that Alex is still clear of tumour.He still continues to take Thalidomide.

He does have focal seizures every 4-5 days but he copes with them.He has tried most anti-seizure meds and this is the best control we have. Alex isn't bothered, he just gets on with life.

His last scan in June 07 showed no change meaning there is no tumour there.He will be having a plate put in his head soon to cover the hole in his skull although he has been wondering whether to wait until next summer when he finishes school.

Alex does have problems with focal seizures which we are addressing on an ongoing trial with different medications.

Alex has been having regular scans every 6 months which show that there has been no tumour reoccurence. There was a brief spell after he had a plate moulded onto his head when there was something showing but it must have been from the op not tumour.

He is well but has been left with a few problems.He has a short term memory problem, slow processing of information, epilepsy, visual impairment, uses a wheelchair for anything other than short journeys and a weak back. He is slowly getting used to his new life.

Alex is doing OK. For the last year he has had "something" showing on his MRI scan. The hospital thinks it is a cavernoma, which keeps growing, but they are not sure, so we are on watch and wait. His seizures haven't gotten any worse or better so that isn't any help. He has had problems with the bottom of his mouth and teeth,so there have been many dental and hospital appointments for these. He has also started a rehabilitation course at the hospital, trying to help with his very bad short term memory. He has met up with some of his friends from Primary School and has been spending time with them, which has help Alex alot.

Alex is still OK. Seizures are the same. Trouble with his teeth is ongoing. He is due for an MRI scan, should have had it last week but the scanner broke down. He is realizing he has problems and often gets upset. He is trying to grow his hair long so it covers the large bald patch on the back right of his head. He normally wears a cap or hat.

No changes since last Update!

Alex is doing well. Still has 6-month MRI's. His last one was OK. He is in the process of sorting out his ongoing health problems resulting from the treatments. He has just had another 3 cysts removed from the surface of his head; he does get quite a few cysts over his upper body. He is also having treatment on his jaw and teeth due to the radiotherapy affecting them. His seizures are the same.

There have been no changes since the last Update:. Alex is still OK.

Alex is doing well, still the same problems. He had some more cysts taken off his head; his braces on his teeth are doing their job. He has been depressed, so he is on anti-depressants. MRI's still clear.

Alex is doing OK. He had a MRI in November which showed no tumour recurrence but a small additional perivascular space, may be related to radiotherapy. Scan again in 6 months. He still gets very tired and has seizures.

Alex is doing fine. Last MRI showed a slight increase in the perivascular space. Just keeping an eye on things at the moment.

Alex is fine, he has an MRI every 9 months to a year. He has not had a recurrence of the GBM. He still has ongoing problems with the effects of his treatment.

Alex has been doing OK. He still has seizures which cause him to be sick. His short term memory has not gotten any better and he still needs 24 hour care. He has regular MRI and ECHO scans.

Alex is doing ok. He has lots of side effects that are gradually getting worse. He is anxious most of the time so we are looking at changing his medications. His seizures are not controlled at all. We try to keep him on an even keel. Other than that he's been a survivor for nearly 20 years. Lorraine (Alex's mum)

Send a message to Alex!