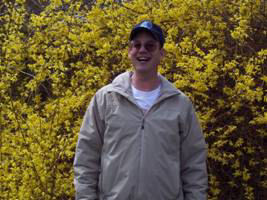 I'll keep this short, I promise!!!

In 1994, I was on active duty in the U.S. Air Force, when I noticed some unusual symptoms - numb fingers, vision problems, slobbering on my pillow at night (disgusting!), lethargy, and a lot of staring off at nothing. Oh, then there was the seizure. I was misdiagnosed by the military doctors for two years. They kept telling me that there was nothing wrong - which was what I wanted to hear! Then there was that seizure. I had the seizure at home, on my couch. 911 was not called, and I came out of it OK. But, I knew something was wrong. I found the best doctor around - she ordered an MRI... "A large mass" ( 4th ventricular ependymoma).

Three months in the hospital. Craniotomy (99+%), radiation (fractionated, I got the full dose - no chemo), blood clots, trachea tube, infections, pneumonia, PEG tube, and maybe worst of all - those military nurses! (actually, they were very good)

Since then, I have retired, became the facilitator of two online support groups ( the adult ependymoma and spine tumor online support group - part of T.H.E. Brain Trust, http://braintrust.org/) ,and co-facilitator of an in-person group here in New Jersey ( The Monmouth and Ocean County Brain Tumor Support Group). I have been to brain tumor conferences in three states (so far), I have written an article about BTs that was published in a local newspaper, I have requested my mayor declare Brain Tumor Awareness Week for his city (which he did), I have traveled to Washington, D.C. to speak to elected officials about brain tumors, and maybe some other things too (you see, I don't remember so good anymore). I have double vision (corrected by prism lenses), balance problems, memory problems, and other things (I told you I forget things!)

But, I am Alive!!!
So now, I drive slower than I used to, I notice more, I enjoy every day and - I appreciate Life!!!

I was highlighted on CNN

As of this date, I remain (thank God) tumor free. While not deficiency free, my quality of life is very high. More than ever, I am sure that having a positive attitude is paramount to ones happiness - whether they are a survivor or not!

In January (the 27th, actually), I celebrated my 17-year "Tumorversary"!!! I am very blessed in that I have experienced no new deficiencies since my original "survivor" story was written. Mine could recur, but my wife keeps telling me that there is nothing in my head so I am going with that!

All is good yet again!

Thanks to God, January 27th, 2015 will be my twentieth "Tumorversary"!

Held my 5th annual "Walk To End Brain Tumors" as part of the "Grey Ribbons Crusade"- raised over $33,000 for brain tumor research.

I just had my 4th annual "Walk To End Brain Tumors - New Egypt" in May. This is held as part of the "Gray Ribbons Crusade". Through the years, the walk has raised over $75,000 which has gone directly to brain tumor research.

Still here.....by the grace of God! My MRI is coming up, if I remember to schedule it!

Send a message to Bruce!