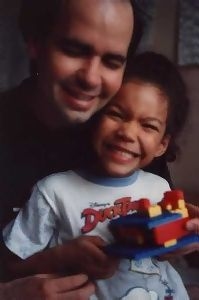 Greg awoke up at 3 a.m. on May 15, 1992, disoriented, suffering spasms on his right side. His wife telephoned paramedics. Soon after they arrived, Greg seemed to come out of his stupor and was allowed to go to the restroom. While he was there, he suffered a seizure and fell to the tile floor with such force that he fractured a vertebra.

Greg was rushed to DePaul Hospital, the closest to his home, where doctors focused on his fractured vertebra. A neurosurgeon, Jonathan Partington, was in the E.R. and wanted a CAT scan to find out what caused the tumor.

The CAT scan showed a tumor the size of an egg in the left frontal hemisphere, in the area that controls speech and language. After several days of anti-inflammatory medications, Dr. Partington took Greg into surgery and removed the tumor. A post operative MRI showed no sign of residual tumor.

Dr. Partington feared that Greg might have trouble speaking or communication after surgery. Because Greg was left handed, he had shared functions for speech and language and suffered little impairment.

Because of doctors weren't certain about the grade of the tumor, Dr. Partington sent samples to the Armed Forces Institute of Pathology, which determined that Greg's tumor contained anaplastic cells. Greg went through a standard course of radiation.

Fearing that he might not life to see his three-year-old daughter, Emmy, grow up, Greg began writing letters to her. The letters ended up documenting those early weeks and months, when everything seemed uncertain. After several months, a newspaper published stories based on these letters. Because of the tremendous response, a publisher decided to publish a book, Magic and Loss, based on the letters. After that was published, Reader's Digest selected Magic and Loss as a condensed book selection. It ran in 17 languages. The book has since been published in full in Germany and Taiwan. Greg's story has also been included in Navigating Through a Strange Land, book for brain patients and their families, published in 2001 by Fairview Press. His letters to his daughter also form a chapter in A Message of Family, an anthology published by Reader's Digest in 2001.

In the ten years since his illness, Greg has lived in the Czech Republic and India and has traveled around the world. He has written for dozens of newspapers and magazines and has a novel coming out in March, 2002.

Greg Raver-Lampman speaks to cancer support groups and has raised money for the American Brain Tumor Association. He emphasizes that hope and an abiding desire to live are an essential to survive any illness.

Greg Raver-Lampman is now working as a public relations manager for Children's Hospital of The King's Daughters in Norfolk, Va., and has had no recurrent seizures, tumor growth or symptoms. He's continuing to write and is working on a sequel to Magic and Loss, the book of letters he wrote to his then 3-year-old daughter when he feared he wouldn't survive. Excerpts of Magic and Loss were published in 17 languages by Readers Digest. The sequel will end with his daughter's graduation from college.

Six months later and I'm still doing great. One nice thing about having my profile on Virtual Trials is that I get email from people who are just beginning this journey and feel as if I can help them. In some cases, I'll send along a copy of my book, "Magic and Loss," the letters I wrote to my daughter when it appeared I wouldn't make it from spring to Christmas.

Greg Raver-Lampman is still working at Children's Hospital of The King's Daughters as publication relations manager, just completed a master's degree in Applied Linguistics and has recently watched his daughter graduate from college. He continues to receive and respond to emails from cancer patients who have read his book, Magic and Loss, which is being updated to include some changes that have taken place in his life.

Greg Raver-Lampman is still writing and will be coming out with a sequel to his book, "Magic and Loss." He is now teaching English composition and English as a second language at Old Dominion University and Tidewater Community College. His daughter, Emmy, who was 3 when he was diagnosed, has graduated from college and is performing in her second Broadway tour.

I am now teaching English as a Second Language at the Old Dominion University English Language Center, which brings in students from around the world who need to work on their English skills before attending an American university. It's a great job, and leaves time for writing.

I'm also finishing up a sequel of my book, Magic and Loss, which covered my diagnosis and first six months of treatment, and was addressed to my then 3-year-old daughter, Emmy. My new book provides updates and includes a forward and an afterward by Emmy, who is now 25 and performing on Broadway. The sequel is called Postcards from the Storm.

There has been no change in my brain tumor status since the last update.

I am now teaching at Old Dominion University in Norfolk, Va. My daughter, Emmy, who was three when I was diagnosed, makes her living in musical theater. She has been on Broadway three times.

The only update (and it may not have changed) is that I am teaching English as a Second Language at the Old Dominion University English Language Center.

Greg Raver-Lampman is now working teaching English as a Second Language at the English Language Center at ODU. He is publishing an update of his book, Magic and Loss, with the title, Postcards from the Storm. It includes a prelude and postlude by his daughter, who is now in her 20s and performing on Broadway.

Greg Raver-Lampman is in Yerevan, Armenia, teaching English as a Second Language in conjunction with a Fulbright Scholars program. Since being diagnosed, he has written and published two books, including Magic and Loss, a book of letters he wrote to his then 3-year-old daughter when doctors told him he had only a few months to live. Greg has continued writing, and also obtained a master's degree in applied linguistics, with an emphasis on teaching English to speakers of other languages. He has lived and worked in Calcutta, India, Olomouc, Czech Republic and Kyiv, Ukraine. He has launched a company, Raver-Lampman & Associates, that specializes in linguistic training and that sells software he has written. His daughter, Emmy, is now 29 years old and has performed in five shows on Broadway, including as Elphaba in Wicked and as the female lead, Angelica, in Hamilton. Today Emmy is working on a Netflix series, Umbrella Academy, starring alongside Ellen Page.

I recently received a Fulbright Specialist Award to teach English as Foreign Language in Yerevan, Armenia. I taught master's level students and also trained faculty in the used of online resources. In July, 2019, my wife and I moved from Norfolk, Virginia, to Camarillo, California, to be closer to our daughter, Emmy. Emmy recently landed a starring role in the Umbrella Academy on Netflix.

Send a message to Greg!