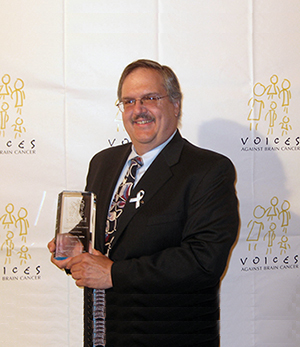 At that time, there was no world wide web! Version 1 of Netscape was released on December 15, 1994. Al was an active member of Compuserve, and Compuserve had a cancer forum, with sections devoted to the top 10 cancers (and no brain tumor section). Al created and ran the Brain Tumor Forum on Compuserve in January 1993. He organized the members and had them help survey every major hospital in the USA to find what treatments were available. That list was posted on Compuserve and became the basis for the first internet database of cpnical trials! At that time, the NCI only maintained lists of clinical trials that they funded, not the trials sponsored by the drug companies or the individual doctors or hospitals. (They do most now). And the only way to access them was to call the NCI and they would mail them to you. The NCI invited Al to demonstrate his technology to them, and the clinicaltrials.gov website was partially modelled after virtualtrials.org!

Al found a few clinical trials that would accept Lana, after being told by a few major brain tumor centers that there were none. She did very well for a while, getting to see her 4 kids grow up, then unfortunately died of a recurrence on Oct 25, 2000. She lived over 8 years after being told she only had a few weeks left. Many of those years was in excellent condition, with her taking care of her kids, working, driving and enjoying life.

We have awarded over $7.25 million (as of July 2020) in direct patient assistance to help patients get the treatment they need.

We have run a few letter writing campaigns which had major impacts on the lives of brain tumor patients:

Dr. Musella testified at the FDA hearing to help get Optune, Glialan approved.

How can you help?

Help keep the Clinical Trials up to date: If you know of any important treatments that my list is missing, ask your doctor to submit it to us. If you find a trial posted that no longer is active, let us know.

Join the Virtual Trial: All people with brain tumors are eligible, and it is free. It just takes a few minutes of your time.

Spread the word: If you belong to a support group - try to recruit the other members into the Virtual Trial project. A "paper version" will be available soon to make this easier for people without computers.

Donations: Contributions are urgently needed to support these projects. Even small contributions can make a difference, and we have an easy way to make small (and large) contributions!